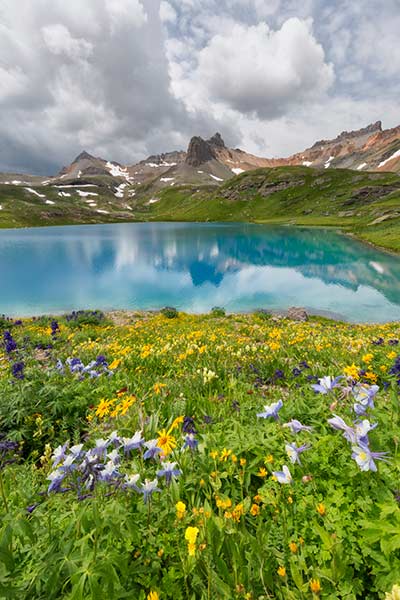 Next Spring will see the release of my next book. I love book projects, and this is one of my favorites. The subject is the Four Corners region, and that’s got to be my favorite place to photograph. The shot list is a who’s who of all-star Southwestern locations.

The first visuals to come to mind when the Four Corners are mentioned are those sandstone wonderlands like Bryce Canyon in Utah; Shiprock in New Mexico; and Coyote Buttes or Petrified Forest in Arizona. The Four Corner, of course, includes Colorado. And it’s mountains are green. Very green. A refreshing change after visiting many places of orange, yellow, and tan sandstone.

August is the time to be photographing in southwest Colorado. The San Juan Mountains hold fading memories of last winter, the remaining snow on the mountainsides is irregularly spotted like Appaloosa horse hide. The nights aren’t so cold, and during monsoon season the moving clouds become magnificent displays of majestic beings in the sky.

Mornings starts with clear blue sky, then by lunchtime clouds are rolling in, seeming to appear out of nowhere. If the right conditions are in place, those clouds will join together, then soon decide whether to remain docile or begin to cause some trouble. In the mountains, afternoons rain showers make the hillsides lush and bright green. But the committee of clouds can start playing games with those below by mixing in some hail to spice things up. Or send in the flash, boom, bang of thunder and lightning.

On the rigorous hike up to Ice Lake, the sky did just that. It started innocent and blue, then sent in some big boy clouds, and finally, not long after this picture was made, started to dapple the lake in raindrops, then just for fun, mixed in some hail. Timing is everything, and had I gotten to this beautiful alpine lake only an hour before the show was over.

Thankfully, the storm clouds were only just brewing up some ideas of what the afternoon should entail. Catching my breath from climbing to over 12,000 feet of elevation, I looked over the scene for a photo location. The trail meets the lake head on, and as I looked around there was a carpet of of wildflowers off to the right. Blue columbine, larkspur, and a confetti-like celebration of reds, yellows, and green covered the slope below impressive jagged peaks.

Crossing a wide stream that drains overflow from the  lake, I gingerly rock hopped, to keep me and my professional camera gear out of the water. On the other side, I saw a few groups of hikers arrive and collect along the edge of the lake. I needed to crop them out, yet still capture a feeling of the full scene. Although I made some horizontals that I liked, it was the vertical framing that I would end up liking best. It allowed me to gracefully crop out the hikers while including the lush display of wildflowers, and the billowing clouds that were beginning to dwarf the nearby mountains.

With such a profusion of colors, textures, and shapes, it took some time searching and experimenting to find just the right place for the tripod. Working in paradise has its challenges. How to capture all that beauty while giving the scene some logical sense. The clouds were gathering together to cause some trouble. I was glad. A blue sky or friendly puffy clouds just don’t show much emotion. The building clouds gave the top of the photo some restless punch.

But then I felt the first raindrops hitting me. The lake soon appeared animated with polka dots, each raindrop splashing into an expanding pattern of concentric circles. Circles overlapped circles becoming quite lovely in a pre-storm, zen-like simplicity. The frilly lace patterns began to get messy, more rain was falling, the fun was over.

I quickly folded my tripod, and packed my gear. I zipped my Canon 5D Mk III inside my camera daypack. Then pulled the built-in rain cover over the pack (Lowepro Photo Sport BP 300) from its hidden pouch on the bottom. It was time to go. The bliss of having spent time in paradise was quickly dissolving. Rain, sweet rain, was once again making the Colorado mountains beautiful and green. I returned to the trail, and began the 2, 400-foot descent to the trailhead, three miles away. Being in bliss can only last so long.

What better place to reflect and rejuvenate than the sacred heartland of the Navajo? The mind expands here to take in the grand vistas, absorb the infinite sky, and stand in silence with the … END_OF_DOCUMENT_TOKEN_TO_BE_REPLACED

The North Rim of Grand Canyon seldom sees more than ten percent of the number of visitors that go to the South Rim. This treasure takes time to visit because it is off the beaten path of most … END_OF_DOCUMENT_TOKEN_TO_BE_REPLACED