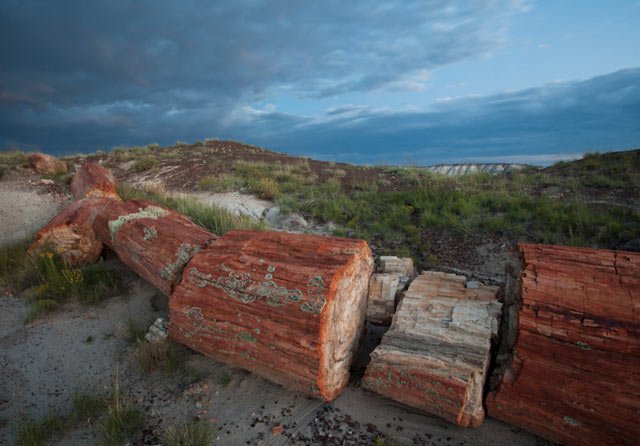 In a hidden land of blue mesas and crystal forests, a colorful primordial life is locked into quiet eternity. Each day last week, monsoon-engorged clouds bent the rays of the sunlight moving across prairies of moon-like volcanic ash. Here, stone logs hug the earth in stillness.

As you might have guessed, I just returned from photographing the otherworldly landscape Petrified Forest National Park. For two nights and three days, I was a lucky guest in their Artists in Residence housing, a Southwestern adobe casita, tucked within the boundaries of Petrified Forest National Park. Staying at the casita allowed me sunrise and sunset sessions in a cornucopia of possibility.

I had re-discovered this area during last year’s project photographing my “Arizona Kicks on Route 66” book. This is the only national park in the entire country that the world-famous highway passes through. A lonely line of abandoned telephone poles traces the ghost highway east and west from a rusty, roadside 1930s car. Here, the park memorializes Route 66, an amazingly popular pilgrimage of nostalgia for Baby Boomers.

There are of course other stories, much older stories, in the park. Bill Parker, the Petrified Forest’s paleontologist, brings another era of the past alive—the age of dinosaurs. He is one of seven such scientists in the entire park system, and has made significant discoveries here in this park.

Known for its unique beauty and life-like texture, petrified wood erodes from the surrounding rainbow-stripped mesas. But petrified wood is not all that this landscape gives to those that pay attention. 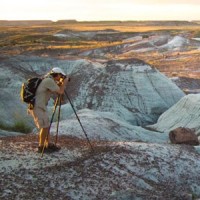 During my 3-day visit, I worked on a feature story about the park for “America Journal” a German travel magazine. As journalist Nina Rehfeld interviewed Parker, I captured the key moments of him explaining their special collections inventory of petrified dinosaur skulls, teeth, bones, vertebra, and imprints of plant life.

Parker next took us to the Giving Site in a hidden and secret valley, a very special place for a paleontologist. But before going to his favorite dig site, he took us into the science lab where the story of primordial swamps is reconstructed piece by piece.

Here we witnessed the painstaking process of releasing the meter-long skull of a Phytosaur. Matt Smith, a fossil preparator, uses small dental tools to pick at encrusted mud inside a 300-pound plaster encasement holding the crocodile-like predator removed from the field. The vicious, armor-clad carnivore once lurked below the water with razor-edged teeth. Parker held one of the dark brown teeth up to the skull.

It is the season for paleontology fieldwork, and Parker soon took us out to his favorite source of dinosaur bones called the Giving Site. After a bumpy drive in a park service 4×4, we hiked from the two-track dirt road out into the wild vastness.

We ambled across shimmering flats, and then scrambled over an unremarkable bluff, and we followed Parker down a broken ravine of dark petrified logs into a secret, hidden valley. He pointed out a thick horizontal line of blue-tinted volcanic ash. This is where he finds dinosaurs. He said he discovered this site on an exploratory hike working with the park archeologist mapping ancient Indian sites.

The noonday sun fell heavy on the bright desert floor. The heat began to consume us when his keen eye soon spotted pieces of primordial armor plating embedded in the soft soil. He gracefully recorded GPS coordinates, photographed the scene, and then tagged and bagged his find.

A couple hours into our excursion I felt my sweat evaporating quickly from my skin, my water supply was running low. But just before we headed back, I saw a glinting light on the ashen surface.

In the nick of time, I had found a tiny dinosaur tooth. Not a vicious Phytosaur tooth, it was something much smaller, but still, it was a real-life dinosaur tooth. Its serrated edge, like a miniature serrated kitchen knife was meant to cut easily through anything. I held the little tooth cupped in my hand, and then we tagged and bagged my find.

The Giving Site is well named. Parker’s secret place just keeps giving him new discoveries. So, in the end, Petrified Forest National Park is not only exotically beautiful at sunrise and sunset, but this is a land that holds hidden treasure for scientists and artists alike. Here, where stone logs hug the earth in stillness is a land that is a Giving Site. But please, take only photos.

Life is most interesting when we appreciate its tome of contrasts. Jane and I first set foot in Alaska in the small coastal town of Ketchikan. Walking past buildings old and new, we came to a creek … END_OF_DOCUMENT_TOKEN_TO_BE_REPLACED