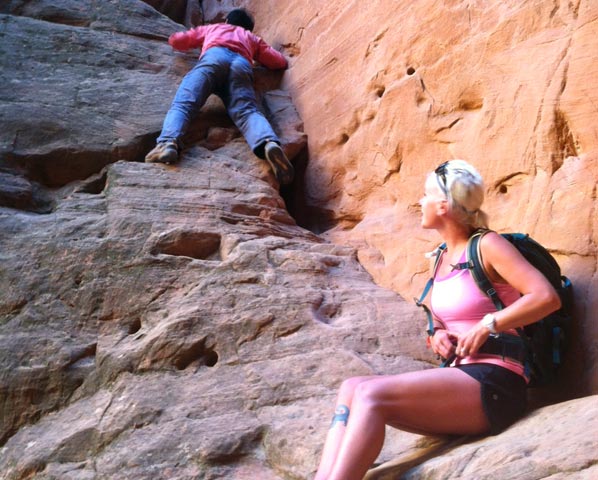 An adventurous group of ten outdoor enthusiasts recently spent a day with me in Sedona. I taught advanced photography and guided several hikes. Every group has its own dynamic but this was no ordinary group. As we ventured into the magic of the red rocks with the young and energetic hikers, I learned about another side of the world.

The outdoor adventure market is growing rapidly in China, and my group was all from China. These hikers included several journalists, a few mountain climbers, as well as, Roger who distributes American outdoor gear (Gregory packs, Keen shoes, Patagonia wear) in China, Fey, a photo contest winner, and a web master with two million outdoor adventure followers.

The trip was sponsored by Wayne Gregory, founder of the Gregory backpack company. Katie Hawkins, international account manager for Gregory Mountain Products helped organize the event. With their offices in Salt Lake City, she and I had developed a plan for their day in Sedona months in advance. (She’s no office girl, being young, blonde, and fit. See photo.)

I started the foreign adventurers with a sunrise shoot along Oak Creek. Using their pro-level Nikon and Canon cameras they excitedly captured the shine of the red rocks reflected into the cascading and pooling waters. Under a rich blue autumn sky warm light slowly melted over the cliffs. The glossy water reflected vibrant reds, juicy blues, and bright greens from the pinon pines and sycamore trees growing above the creek.

The colorful reflections grew more and more intense until the light fell into the canyon bottom. As the mid-morning light washed away the dazzling spectacle of colors we smoothly switched gears.

Being a fan of jump shots, I suggested the idea to the group. (More than half of the group understood English. Those that didn’t got translations from their new friends.) A camera buff with a fisheye lens couldn’t stop laughing as he captured an amazing set of images. All the athletic young women jumped at once then he froze them mid-air against the blue sky. He beamed with pride and giggles erupted all around seeing these gals soaring above the canyon floor.

We quickly hiked back to the cars, and wasted no time heading down canyon to West Sedona to refuel hungry bodies. We got to know each other better over a hearty breakfast at Coffee Pot Restaurant. Expanding our horizons nurtures the soul, but the menu’s 101 omelets was a novelty that many of the travelers photographed before indulging. The restaurant serves enormous breakfast plates.

Ready for more action, I took them to another favorite spot, Cathedral Rock. The official Forest Service trail starts at the Back ‘O Beyond parking lot, but this is perhaps the most challenging official trail in all of Sedona. Still, the popular hike to the saddle of the iconic rock is a vigorous climb scrambling up slated slopes of sandstone, foot holds chiseled into the bare rock in several spots.

But the topper was scampering through the secret passageways among the rock formation’s tall spires. They wouldn’t stop going up. Even when faced with a nearly vertical crack in the cliffs, I watched from below, as they scaled to one more ledge higher. The wonderland of Sedona’s red rocks was working its magic.

They hadn’t heard of the vortex phenomenon. We didn’t dwell on the idea, but taking them to Cathedral Rock gave them a vortex experience just in case anyone asked them later. Beautiful scenery, fresh air sent deep into our lungs, and a rush of endorphins gave everyone a good vibration.

Not to miss a beat, we continued on to Red Rock Crossing. Food was not an issue, in our daypacks we were carrying mammoth sandwiches made by Mike and his gang at Sedona Memories in Uptown Sedona on Jordan Road. The drive down Upper Red Road Loop Road was enough to wow the first-time Sedona visitors. But when we landed at Crescent Moon State Park and meandered along the stream to a special reflection pool, their eyes lit up. We photographed the beauty of sunset’s golden light painting Cathedral Rock into a magnificent curtain call to a day of exploring the wonders of Sedona.

Our team of avid adventurers once again returned to town, victorious in our daylong quest for a rich Sedona experience. There, under the darkness of evening skies we wrapped up our day at Picazzo’s restaurant on the outdoor patio. A long table of happy, dusty hikers shared a variety of gourmet pizzas. Wayne brought out his bag of magic tricks, literally, and stumped us with his clever, mind-game puzzles.

And so, for the intrepid travelers, the grand finalé ended with everyone going home with a signed copy of “Secret Sedona“, the red rock’s positive energy now resonating with a special group of hiker/photographers clear across the globe.

Life is most interesting when we appreciate its tome of contrasts. Jane and I first set foot in Alaska in the small coastal town of Ketchikan. Walking past buildings old and new, we came to a creek … END_OF_DOCUMENT_TOKEN_TO_BE_REPLACED