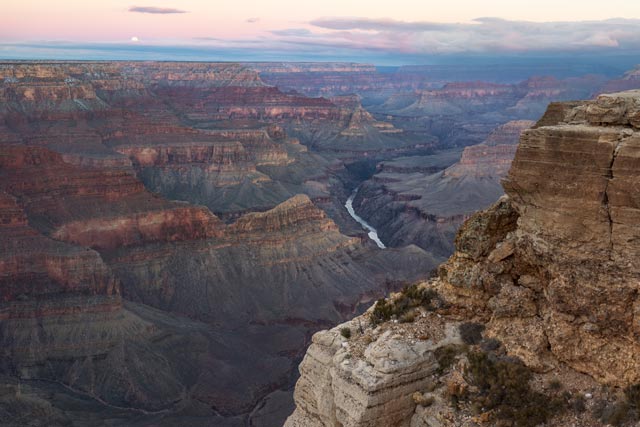 Rise and shine, it’s well below 20 degrees outside. The morning sun won’t break the horizon for at least another hour. Wake up the brain with a hot cup of coffee while dressing the body in the dark. You stumble through the entanglements of putting layer upon layer of winter clothing.

Pull on the thermal long underwear, thick socks, snow pants, and hiking boots. Wrap up in polypropylene, zip-neck polyester, polar fleece, then a down jacket. Pull on a fleece hat. Where did I put those gloves?

Don’t forget the Yaktrax. When you get there you’ll strap them onto the bottom of your boots. Don’t need to slip on the ice. Especially while looking for a vantage point in the dim light along the thousand-foot cliffs of Grand Canyon.

The engine is warming up, put the vehicle into gear, and drive away to the place you’ve scouted. Park, turn off the headlights, slip the traction devices onto your boots, and strap on the heavy camera pack. Walk into the dark of night.

The distant full moon shines brightly, sinks ever so slowly that you can’t believe you’re seeing the rotation of the Earth. The dark begins to fade. The Blue Hour begins, and the moon falls into pearlescent clouds.

The sun climbs from below the Earth toward the eastern horizon. Our planet casts a powder blue shadow. It hovers in the atmosphere to the west, then slowly floats downward. A first blush of light breathes pale pink far behind the terrestrial formations. Twilight hangs onto its final moments.

This Grand Canyon winter sunrise appears silently in the cold, brittle air. The full moon slides toward the horizon, then is lost in the clouds. There is a transient beauty to the Blue Hour. Beauty of a gentle kind. Grand Canyon seems like a new born baby.

Life is most interesting when we appreciate its tome of contrasts. Jane and I first set foot in Alaska in the small coastal town of Ketchikan. Walking past buildings old and new, we came to a creek … END_OF_DOCUMENT_TOKEN_TO_BE_REPLACED