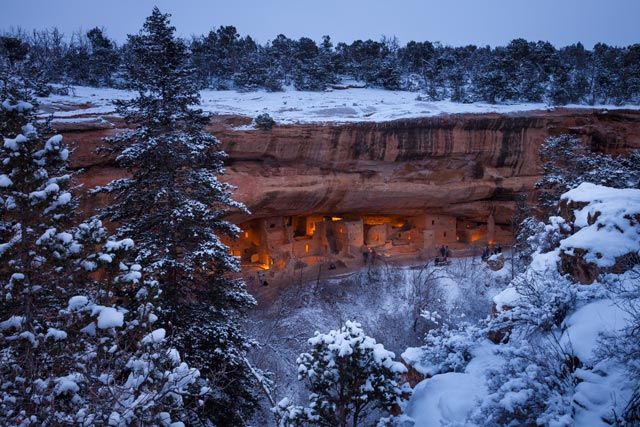 For only one night each year Mesa Verde National Park celebrates the winter season with a special evening of luminarias. Everyone can enjoy the Southwestern holiday tradition of lighting candles inside the paper bags that line the pathway to Spruce Tree House. The ancient ruin truly comes alive at twilight as the warm glow of dozens of lanterns illuminate the many stone rooms tucked away in the alcove. And with a little imagination one can easily visualize the ancient people spending a cold winter night protected from falling snow.

The pueblo has 130 rooms and eight kivas, nearly filling the 89-foot deep cavern which housed about 60-80 inhabitants. Tree-ring dating shows original construction began in A.D. 1211, and ended in 1278. Visitors can enter one of the kivas by climbing down an authentic-looking wooden ladder into the enclosed underground ceremonial chamber, and on that cold night the kiva was actually quite comfortable inside.

The ancient dwelling was first discovered by two ranchers in 1888 and has been open to park visitors since 1908, soon after excavation was completed by Jesse Walter Fewkes of the Smithsonian Institution. Picturesque Spruce Tree House is one of the three largest ruins in Mesa Verde National Park. Please visit the Mesa Verde Institute for information on special tours and interesting workshops. The nearest town to the national park is Cortez, Colorado.

Life is most interesting when we appreciate its tome of contrasts. Jane and I first set foot in Alaska in the small coastal town of Ketchikan. Walking past buildings old and new, we came to a creek … END_OF_DOCUMENT_TOKEN_TO_BE_REPLACED