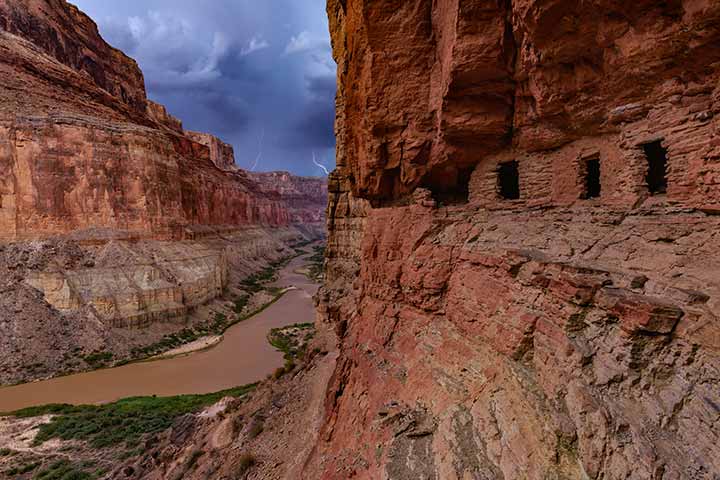 There is an unequalled excitement for one particular season in the Southwest: Summer monsoon season. In early July, the desert landscape shifts from piercingly hot, dry air toward a damp clay aroma as cool winds carry the smell of rain. A sudden temperature drop warns anyone caught outside that lightning and hard rains may be quickly coming your way.

When thunder and lightning happen together it means serious trouble. Its very likely that a cloud burst will pummel the surroundings and dry creek beds can quickly flood with fast-flowing water. But the brilliant light shows of the monsoon season are a photographer’s rare opportunity to capture the true sense of a powerful storm. Dark clouds show the possibility of wet weather, but lightning shows that a war is brewing in the sky.

On a recent river trip through Grand Canyon we rafted down the muddy Colorado River which only got muddier at the confluence with the grey-brown Little Colorado River. Sticks, branches, and small chunks of dark, water-soaked wood floated beside the boats swirling in the currents and getting tossed around by the hissing waves and crashing rapids. The eddies and beaches were littered with the detritus of the twisting, narrow sides canyons. One notable side canyon lower down was flushing reddish, sediment-rich runoff into the main channel giving the chocolate river a cayenne pepper glow.

Climbing above the river the danger of lightning seemed to increase as rapidly as the views expanded. A fast-marching storm was overtaking the river farther downstream. Rain spat polka dots onto the powdery dry sand on the steep trail to the ancient ruins at Nankoweap. I wondered what, exactly, was coming my way as wind increased and more rain drops stung my bare arms and legs. I continued my climb to the protective overhang of the ancient site.

When I reached the full height of the trail the storm moved along with mysterious intent. The storm never hit and could now be observed unfolding a safe distance away. The sense of danger slowly dissolved. Short, quick spears of lightning danced across the rim of the canyon flashing here and then there. Distant thunder rang between the stone cliffs, the echos sounding far away. The retreating storm still resonated with the visceral excitement that puts the body on high alert. The visual drama of each flash quickens the mind. The soul feels so alive within the danger and beauty of a storm.

A favorite saying among landscape photographers reminds us that “bad weather makes good photos.” Judging from my experience in Grand Canyon, it was certainly undeniable that “bad” is not bad, when it comes to weather. The look of the landscape never transforms as suddenly as it does during our summer storms. Just be careful out there!

Life is most interesting when we appreciate its tome of contrasts. Jane and I first set foot in Alaska in the small coastal town of Ketchikan. Walking past buildings old and new, we came to a creek … END_OF_DOCUMENT_TOKEN_TO_BE_REPLACED