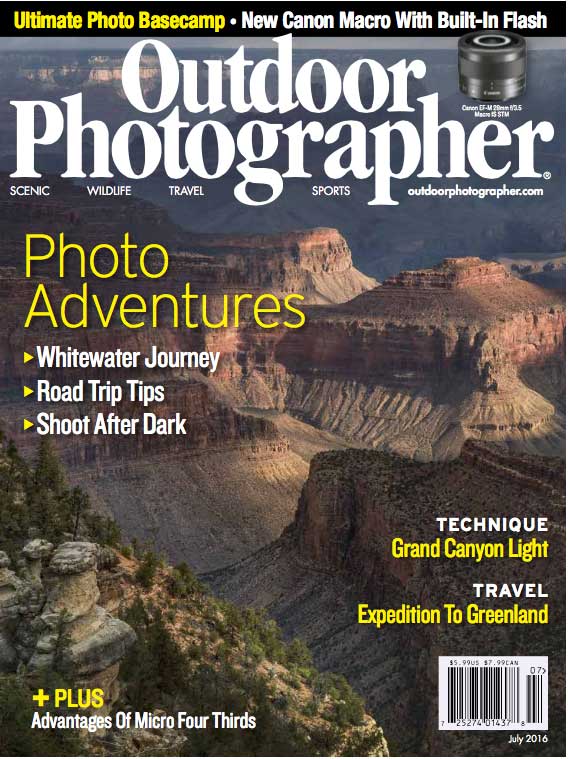 The July 2016 cover of Outdoor Photographer magazine has my photo of Grand Canyon! Dramatic weather was sending clouds through an ever changing storm recently. Between the cloud shadows, patterns of light danced on the temples and buttes. This light/dark contrast made for an intriguing moment of beauty. Inside, you’ll find my article on ten ways to capture Grand Canyon light. Read online or get the magazine.

We had planned to do a six-day backpack, but plans quickly changed. Our small group had started down from the North Rim when partway into the first day we reconsidered our safety. The weather forecast that morning had warned of increasing chances of precipitation with 40-50mph gusts.

Our backcountry route was to eventually traverse tall, remote cliffs along the Colorado River. Within a few miles we soon realized our smallest hiker was struggling. She would easily be at risk of being pushed off balance by a dangerously sudden gust. For the sake of the group we decided to retreat, and relocated to the South Rim to take day hikes for the remainder of our stay.

The next morning we could see that the incoming storm had begun creating visually dynamic scenes below the rim. We parked at one of the first overlooks along Desert View Drive and stood in awe. The clouds were moving remarkably fast as ever changing shadows crawled over the temples and buttes.

Each moment seemed to surpass what had just occurred only minutes before. The fascinating patterns changed so quickly that I continued to shoot until the last gap in the clouds closed up and the light disappeared completely. Sometimes a change of plans takes you to exactly the place you were meant to be. 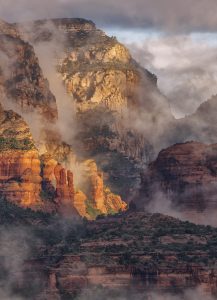 Some calendar days come with expectations. Like Christmas morning when you were a kid. Other memories stay fresh forever. Like the first time you saw the one you wanted to spend the rest of your life … END_OF_DOCUMENT_TOKEN_TO_BE_REPLACED

What better place to reflect and rejuvenate than the sacred heartland of the Navajo? The mind expands here to take in the grand vistas, absorb the infinite sky, and stand in silence with the … END_OF_DOCUMENT_TOKEN_TO_BE_REPLACED